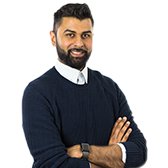 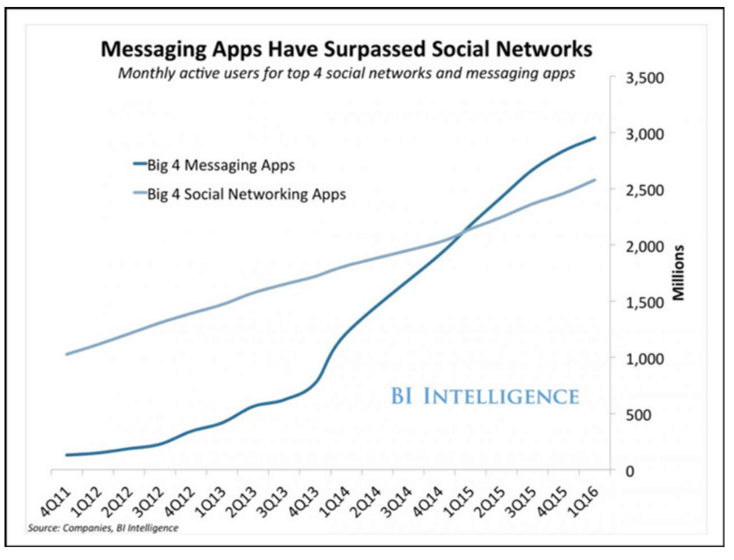 Brands now understand that one of the key ways of being increasingly relevant to customers, is to be where they are; more specifically, communicate where their customers communicate. This of course was a key reason why many early-mover Brands began to shift budgets away from TV and towards Social Networks. Fast forward to 2017, and being ‘where your customers are’ means focusing on one-to-one chat apps like Facebook Messenger and China’s WeChat. Indeed, in terms of the latter, users can not only use the app to chat with friends but also conduct mobile payments, play games, stream music, and partake in a variety of online-to-offline services like ordering cabs and takeaway’s. In order to offer such features, WeChat had to open up its platform to third-parties (i.e. advertisers), which is where Facebook currently is with the development of Messenger; for it to become a more sophisticated product, advertisers have a huge role to play.

Moreover, as demonstrated by the success of WeChat, users actually want to engage with Brands - when it suits them.

For example, say you’re in the market for some Yoga gear. You’ve just started Yoga, so don’t exactly know what you’re doing, or what you’ll need. Engaging with a Brand via Facebook Messenger, allows you to ask those silly pre-purchase questions that will likely be valuable in ensuring an informed buying decision. For example, is a 15mm Yoga mat the right choice for someone of my skill level? What products could help me to improve my balance? Are there any products that can help reduce the pressure on my bad back? The point is, whereas the user experience was previously a relatively one-way experience, now it has become enriched with real-time interaction.

Communication apps were always going to be the next frontier for advertisers, and not just because of the exponential growth over the last couple of years. It is after all, how most of us communicate with friends, on either a one-to-one or group basis. Now as marketers, we can either adapt to this emerging medium, or be left behind.

How to leverage mobile apps for strategic growth

Well, there are two distinct ways for businesses to connect with consumers via this ad format; Facebook Messenger Destination Ads, and Sponsored Ads. 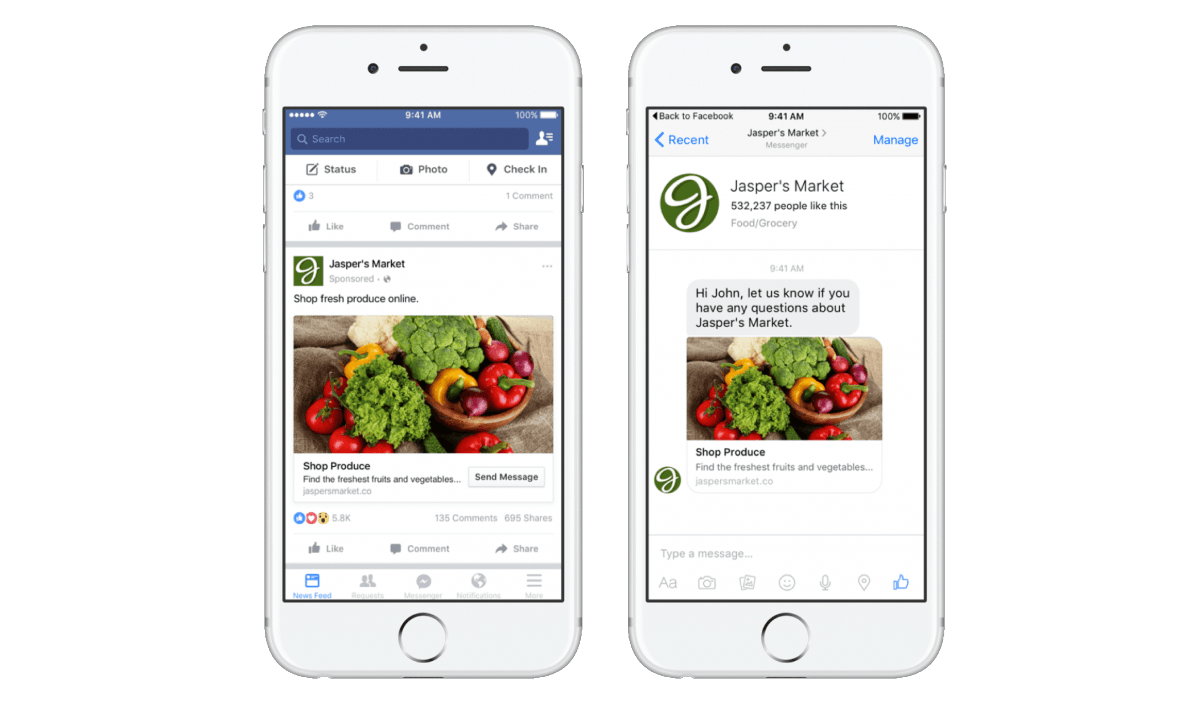 The ad creation element is straightforward, as it can be based of an existing variant such as image, video, carousel etc. You are charged when a user clicks on the ‘send message’ CTA. As with other ad formats, you can use this to target any user, regardless of whether they presently follow your Brand or not - which makes this a particularly interesting prospecting tool.

For example, it’s late October and you’ve just opened a brand new coffee shop. Looking to interact with a local audience, you create an ad which ‘asks’ your target audience to message you via Messenger and offer suggestions on which unusual recipes they’d like to see to celebrate Halloween. A prospect messages you with a suggestion, you exchange some casual chit-chat, and then proceed to offer a discount code if they proceed to visit your shop in the next couple of hours.

Unlike Messenger Destination ads, Sponsored message ads only appear inside of Facebook Messenger itself. The ads will initially appear similar to message interactions from friends, before expanding to a ‘full-size’ message, as the below example for CNN shows: 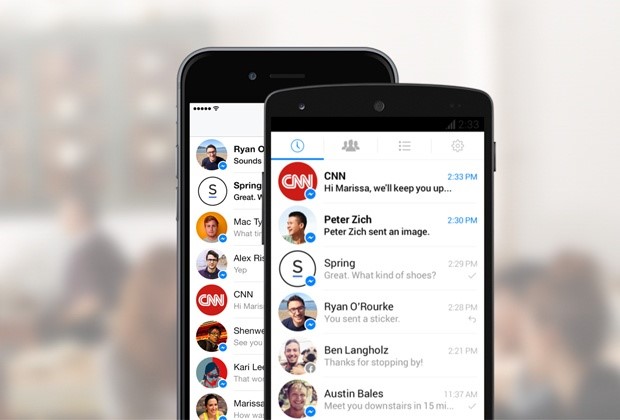 Moreover, you can utilise images and links, in addition to text in order to maximise engagement. But what about message spam you say? Well with this type of ad you can only target people who have previously messaged your page. You’re charged when someone opens a message, as with other forms of message advertising such as LinkedIn InMail.

Looking at example cases, you may want to consider this format as a marketing follow-up to someone who has previously interacted with your Brand, in regards to a customer service query. In addition, you could also seek to retarget those whom have previously engaged with your website, but perhaps didn’t make a purchase. In this scenario, it may be that high delivery costs or lack of product clarity was the initial roadblock, in which case you now have the perfect channel to alleviate those concerns. You could even look at up-selling or cross-selling further items or, why not give them a 15% coupon code off their next order. All of this can be done without the prospect having to pick up the phone or making the effort to visit a bricks-and-mortar store.

You can also use outside channels like email to facilitate initial message conversations. For example if a user has subscribed to your email list, you could promote your Messenger functionality as a more ‘responsive’ way to engage with your business (think following up on order tracking status, arranging hair appointments etc.).

Which all sounds great, however at this stage you’re probably thinking that all this messaging to and fro requires some serious manpower to manage. That may be the case, but with the continued maturation of automated ‘chatbot’ technology, we can now automate much of the communication process. For example, chatbot company FlowXO, offers the flexibility of creating robust bot sequences for Messenger to deal with ‘initial’ interactions, which can then be replaced with a human presence once some form of commercial intent becomes apparent. This allows the advertiser to scale their top-of-the-funnel activity, whilst ensuring maximum control and relevancy once a user journey reaches a more advanced phase.

So to recap, Brands can do three things to ensure that they’re leveraging Facebook Messenger as an advertising platform.

Tags
social media digital marketing Ignite TrainerTips
Further learning
Browse all articles
Blog Posts
Tracking Form Completes With Google Tag Manager
In the many years we have been setting up tracking for our clients, the standout and one of the most requested tasks has to be form submits or, as we like to...
Read More
Blog Posts
Has Your Business Got the Digital Chops to Thrive Beyond COVID?
If there’s been one good thing to come out of the last couple of years of Covid, it’s that the restrictions imposed on all our lives have been a boon for...
Read More
Blog Posts
Ads Are Powering Amazon Revenues and Can Help You Do the Same
There's no question that Amazon is the powerhouse in the e-commerce landscape, with 70% of users saying it is the first retailer they go to when purchasing a...
Read More
Blog Posts
Editing Scorecard Metric Names In Google Data Studio
If you have been getting into Data Studio, chances are you've been making use of the neat little Scorecard charts within your dashboards. This chart type is ...
Read More
Further learning