Why ranking factors are dead 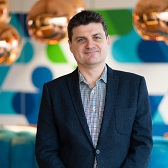 Our top 6 takeaways from the Searchmetrics ranking factors survey 2016

“Traditional ranking factors as we know them are dead” – so said Marcus Tober, Founder and CEO of Searchmetrics at this year’s Searchlove event in London. If this is true you might also expect the company’s annual ranking factors survey to have died with them.

However rather than dying, the survey has been reborn (or rebooted) – bigger and more detailed than ever. So what’s changed and what does it means for your SEO strategy? Here's our top six takeaways from the 2016 survey.

1. One size does not fit all

The survey is no longer one survey at all but rather 14 separate studies incorporating mobile and desktop versions for 6 different industry types. A lot of data has been crunched (hence the wait) across sectors including finance, ecommerce, health, travel and media. The industry specific surveys will be released gradually over the coming months leaving us, teasingly for now, with one average set of results.

Searchmetrics hint at the fact that variation in the data across industries is so significant that it has become pretty much impossible to produce one universal set of results. For example, the desktop data shows that overall 54% of top ranking pages still include a broad match keyword in the page title. However within the finance industry this figure drops to just 30%.

One probable reason for this is the increasing influence of artificial intelligence in the form of Google RankBrain which is now involved in every query. Some have suggested that RankBrain actually changes the factors at play in different queries dependent on its understanding of what the searcher is looking for. This may be an over exaggeration of what RankBrain is currently doing but Searchmetrics does suggest an increasing fluidity in how Google is assessing pages.

As Searchmetrics put it - “there are no longer any specific factors or benchmark values that are universally valid for all online marketers and SEOs”.

The King is dead, long live the King! As with all monarchies, the SEO crown has passed to a close relative. The new ruler of the Google search Kingdom is ‘content that matches searcher intent’. Not quite as memorable as a phrase but perhaps even more critical to your search success.

In 2016 and beyond, your page content has to be relevant to the user and their current search intent. If it isn’t then don’t expect it to rank well – even if the page is well optimised in terms of traditional factors. For example if you search for the phrase “best short hairstyles” the number one result is likely to be the Marie Claire feature below: 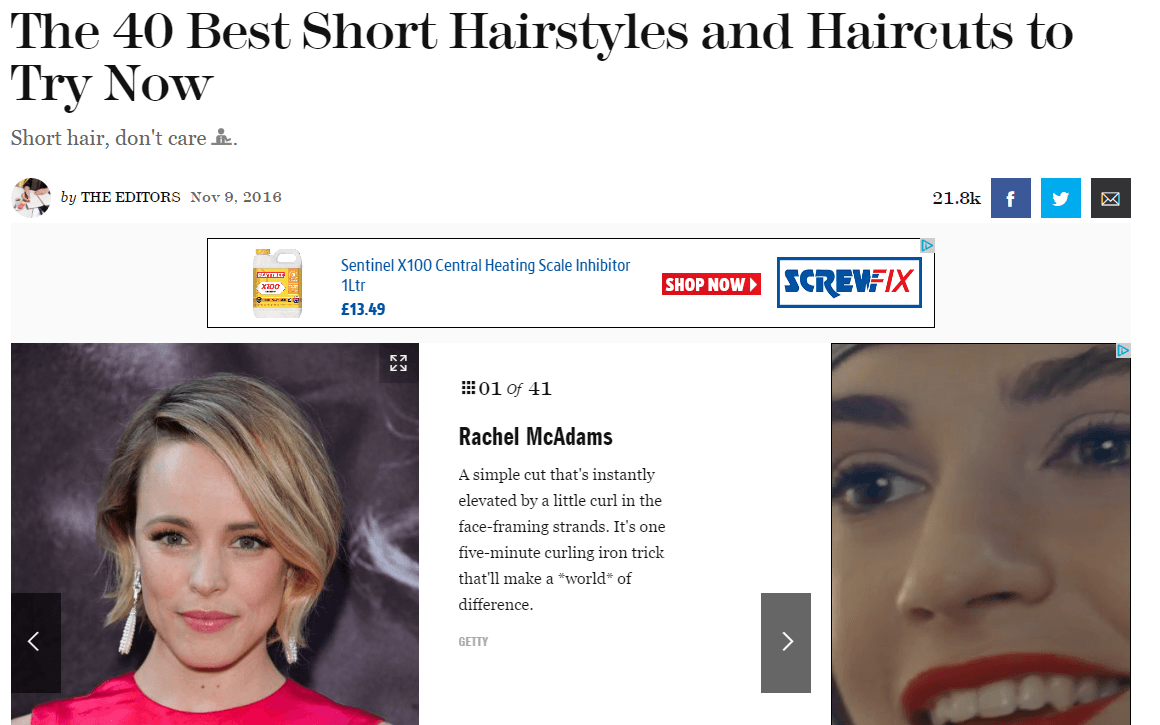 This feature is basically an image gallery featuring embedded text – traditionally bad for SEO.  Yes it sits on a trusted and relevant domain but the page is extremely content thin in a traditional SEO sense.

So why does it rank so highly? Because Google has decided that when a user searches using this phrase they most likely want to see examples of great haircuts – not read an essay on the virtues of the pixie crop. Therefore it meets the user’s search intent better than other longer form content. Optimisation now means understanding how the intent behind different types of queries, from informational to transactional, should dictate the content and structure of your pages.

Searchmetrics have placed ‘Content Relevance’ front and centre of its latest study, building an algorithmic solution for measuring it. This has led to the creation of a whole new product, The Content Experience Topic Explorer, intended to help you gauge user intent.

3. Word count matters, but not for the reason you may think

Despite the example above, the correlation between longer form content and good rankings appears to grow each year. This trend has continued in 2016. The survey shows that average word counts for top ranking pages sits at 1,633 words for desktop and 1,222 for mobile. Again we’re likely to see large variations across industries but the overall trend remains clear – more text based content means better results.

However, as we have seen above it is not the amount of content that matters but whether or not it matches searcher intent. It’s clear that Google is not simply showing a preference for pages with higher word counts. What Google is rewarding is content that covers its subject in a greater level of depth and detail – what Searchmetrics describe as ‘holistic content’.

It’s easy to forget that understanding a user’s search intent is not easy and often people are searching for answers to a broader range of questions than their initial query suggests. This is the reason we have seen Google move to move richer search results that include elements such as ‘people also ask’ boxes and detailed knowledge graph results. If Google’s own results are looking to answer questions beyond the original query then it follows that it will reward content that does the same.

The takeaway here is not simply to write more but to carry out in-depth research into the other questions users may have around the same topic. Pages with more content tend to answer a broader range of queries – hence the correlation with higher rankings.

Links are still one of the two most important ranking factors (alongside content). We know this because Google Senior Search Strategist Andrey Lipattsev told us so in a webinar back in March. Although correlations are weaker than in previous years, this seems to be back up by the data gathered by Searchmetrics.

However as discussed in point one – we can no longer expect links to carry the same weight across all industries. We expect that the industry specific data, when released, will show significant variation with backlinks actually showing as a negatively correlating factor in at least one case.

UX factors such as Click-through-rates, time on site and bounce rates have been showing increasing correlations for the past couple of editions of the Searchmetrics survey. This year’s data sees that trend continue.

To some extent the data is self-fulfilling here – we’d expect to see pages ranking higher in Google showing higher click through rates. Time on site is perhaps a more accurate indicator of user experience and again we see a positive correlation here. 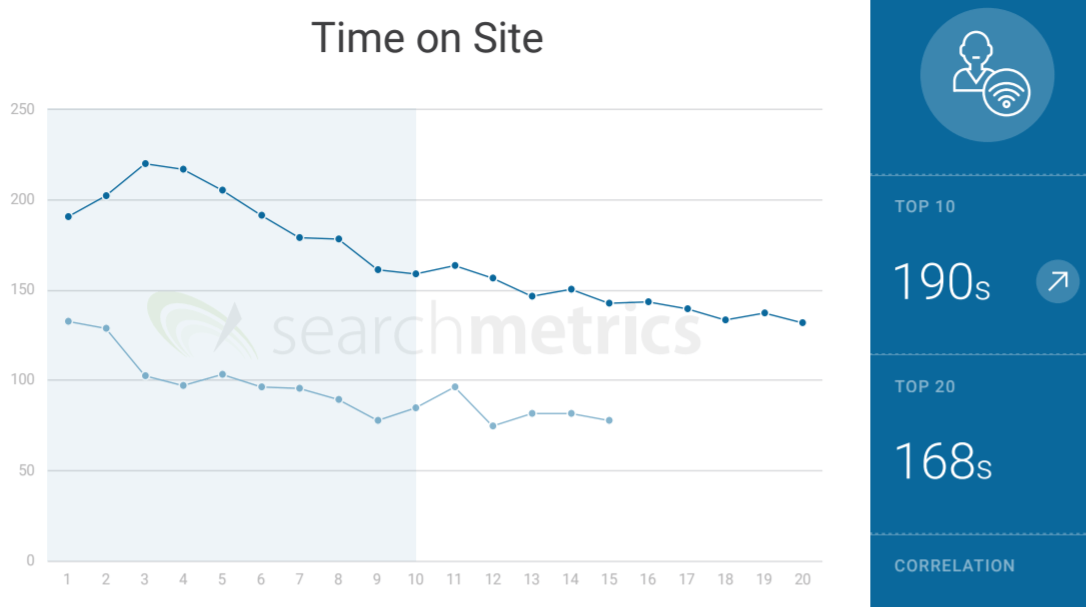 Despite these positive correlations Google still denies using this type of user experience data as a direct ranking factor. What may be happening is that Google has simply got a lot better at understanding the types of content users are likely to find engaging for any particular search query. In this case the high correlations would be confirming Google is returning the right pages in the SERPs rather than acting as proof that time on site is being used as a direct ranking factor.

In truth the debate is irrelevant. Whether Google is measuring content relevance or time on site (a by-product of content relevance plus good UX), the key learning is the same - build pages and create content that answer users queries in a way that engages them. If you do this then ranking improvements will follow.

Google have made no secret of their desire to see a more secure web and serving your pages via HTTPS was confirmed as a lightweight ranking signal back in 2014. This has since been re-enforced many times by Google representatives.

While take up was slow initially, the chickens appear to have come home to roost in secure sheds in 2016.  45% of all pages ranking on the first page of Google are now served via HTTPS according to this year’s data – a massive increase on the 14% reported in 2015.

This doesn’t mean you should be rushing to migrate your website to HTTPS, however it does mean it should be on your agenda for the future – at least the next time you redevelop your site. Google have already announced that pages that have not switched to HTTPS by 2017 will be marked as unsafe in Chrome.

Again how much of a priority this should be depends on your industry. If you’re in e-commerce for example and you’re not on HTTPS you’ve got some work to do! We’d expect to see much higher rates of take-up here when the industry specific data is released.

If traditional ranking factors are dead then it makes sense that traditional SEO techniques have to die with them.  So if you want to know how you should be approaching SEO moving into 2017 check out our related post - Beyond SEO Ranking Factors: 5 ways to optimise your content in the RankBrain era

Tags
SEO content digital marketing Ignite TrainerTips
Further learning
Browse all articles
Blog Posts
Tracking Form Completes With Google Tag Manager
In the many years we have been setting up tracking for our clients, the standout and one of the most requested tasks has to be form submits or, as we like to...
Read More
Blog Posts
Has Your Business Got the Digital Chops to Thrive Beyond COVID?
If there’s been one good thing to come out of the last couple of years of Covid, it’s that the restrictions imposed on all our lives have been a boon for...
Read More
Blog Posts
Ads Are Powering Amazon Revenues and Can Help You Do the Same
There's no question that Amazon is the powerhouse in the e-commerce landscape, with 70% of users saying it is the first retailer they go to when purchasing a...
Read More
Blog Posts
Editing Scorecard Metric Names In Google Data Studio
If you have been getting into Data Studio, chances are you've been making use of the neat little Scorecard charts within your dashboards. This chart type is ...
Read More
Further learning